The best thing in life is, to be able to be with your loved ones….naaah! They nag a lot, expect a lot & give you nothing but a headache!

The best thing in life is to have friends you can share everything with…naaah! My ex cheated on me with my best friend!

The best thing in life, for me, is to be able to lie down, propped on pillows, specs on, in the dead of the night, with a book in my hands. No coffee for me please, the book’s enough to keep me awake. No pressure of pending work, no one awake around you (except the ‘bahadur’, but then he shows up only towards the end of the month), just the book. I’m a reader, an ardent, vivid (& a whole lot of adjectives thrown in) kind of reader. I read everything, signs on the road when in the car, a magazine when waiting for friends in the parlour, the morning newspaper (carefully avoiding the national politics part) & of course novels. Well, I do even read my text books, so that should prove I read everything!

My favourite part about books is that they don’t mind if you don’t like them or give them bad reviews. A book won’t get jealous if you start reading another in the middle of the first one. You can interpret them as you like & no one can tell you ‘you got me all wrong’. You can re-live the best parts again & again. You can skip the parts you don’t like & save yourself all the pain! I think books are a beautiful way to let you be. Here’s one thing you do for yourself-you dress to impress others, you eat carefully to look good,  you date people who make you feel good about yourself. But with books, it’s just you.

I really wish everyone could try this once. Grab a book & give it a chance. No matter the genre, if it’s a cheesy love story or a philosophical Paulo Coelho, whatever works! The next time you’re lonely, don’t look for a person to be with. Just take a trip down to the library, get a dog eared yellow paged book or visit a store & buy one. Mmmm the smell of the fresh pages of a book…

This post is a part of  Write Over the Weekend, an initiative for Indian Bloggers by BlogAdda

Ravi stared at her intently only as long as was allowed by societal norms. There was something about her that seemed familiar. The almond shaped eyes? The soft pink lips…or the long auburn hair? He sighed frustrated. It was like when you have the name of that song at the tip of your tongue and yet you can’t say it. What was it?! He tried reading the paper to take his mind off things. It grew dark & people on the train soon started switching off their lights. He too finished his dinner, switched the light off & climbed on to the berth above.

He had a dream. It’s been long since he had that dream. He was at the 10th STD farewell party & she had come up to him to ask for the last dance, in front of all his friends. The almond shaped eyes behind black rimmed spectacles, the well oiled auburn coloured hair tied into a neat plait…his laughter. He woke up with a start & looked down. She was gone already.

Nitin was riding his Discover on the wrong side of the road again. It was a shortcut anyway. There was a Scooty Pep coming on the opposite side. He felt a tinge of dread, as the figure riding it came closer. No, it couldn’t be, after all these years.

He had waited by the Scooty for 15 minutes, roses in hand. She had come with her friends, tried not to notice him. He’d mustered all his courage to go up & say the words. She had politely declined the roses. Within a week he had become the laughing stock in his school.

He glanced back at her receding figure. Her hair trying to struggle out from the grasp of her scarf. He spotted the dog running across the road & heard the sudden screech of tires. Some people rushed to help, but he didn’t see all that. He was gone already.

Sometime someday I hope we may meet again, 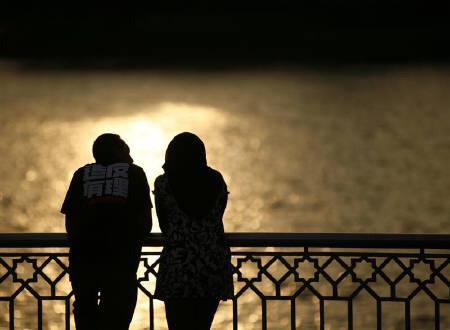 That day neither of us should feel any of that pain.

I wish you may smile at me thinking of those days,

I wish you’d say ‘Hi’ before we go our separate ways.

And later the same night when you & I go to bed,

I wish we’d stay up a while missing each other instead.

Hoping there won’t be repentance neither any regret,

Yet I hope someday sometime we do meet again,

So I can smile at you & let go of all that pain.