I’m moving to Gurgaon in less than a month.A job, a new life,I should be happy.But am more scared than anything. Having lived my life in what can be called as a small city(as compared to metros), I am unsure about staying safe.Not that Bhubaneswar is some rape free zone, where  a woman can walk alone on the streets post 7 PM. You take a random newspaper of any date & I can assure you, you’d find at least one rape case mentioned in there. And never any news of a rapist being punished. Ours is a country where even a doctor doesn’t hesitate before raping a victim who’s come for medical examination! Forget doctors, there are fathers raping their own daughters here.

Sometimes I wonder what prompts a rapist to be one?Unlike the popular opinion that it’s the way the girl dresses, I believe a man turns a rapist because he wants to. It has absolutely no relation with the way she dresses, behaves or if she is inebriated. If the case had been otherwise, wouldn’t all those actresses with minimal attire been raped already? A rapist rapes because he knows he can do it & get away with it. He doesn’t see if the girl’s with a guy (in which case gang rapes occur)or alone, what time is it, they are in a moving bus, train or auto! I believe such acts are those of people suffering from mental illness. Though that doesn’t mean they can get away with it. What other reason could you state for such a behaviour? What could prompt a stranger from carrying out such a heinous act on another human without any provocation? If you think you can justify a girl’s attire can be a cause then I can say all thieves, muggers are then equally innocent, for your wealth/attire is equally responsible. Why then, cops who preach morality & question the character of a rape victim should start calling the income tax department when you make a complaint of robbery! 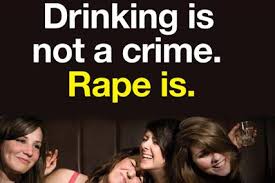 I wish I could claim that making prostitution a legal profession would solve things. But that would only result in women being raped repeatedly not just once. I wish I could say teaching your daughter martial arts would make it better, but then dogs hunt in a group. I am amused by the solutions offered by our politicians & leaders though. Why this treatment of the victim as the offender? Why does she have to get married early, stay indoors after dark, refrain from using modern technology? Rape isn’t a problem just for women, is it? Doesn’t the brother/friend/father of the victim feel the pain as well?Didn’t the girl’s friend get beaten with an iron rod when he tried to protect her?

To put the blame on the gender is completely wrong. Just because some men behave like dogs, doesn’t mean all men are maniacs who can’t control their primal desires. Restrictions should be applied on both. I agree it’ll be  long time before a woman can walk on the road alone in the evening, travel alone & stay alone, without fearing an attack. Until then practising a little caution & using some common sense can go a long way in helping women. Why risk going alone when you can have a friend for company? Why dress in a manner just because it’s fashionable & everyone wears so, when you know the area you’re in isn’t safe? When it comes to attire its well known that women dress for other women never for men, so ladies let’s keep it sensible shall we?

As for men, ignoring all the comments about thinking from a place other than the brain & stuff, I suggest they start respecting women. Just because you’re not raping them, doesn’t make standing there doing nothing a bravado either! Times are changing, women are competing with men & chivalry has long since been dead. Yet how about a little respect & concern for another human being? Women don’t want to be treated like fragile little show pieces, nor they want you treat them like some super hero(ine). Treating them as human beings will do alright!

As for my personal belief, I think there needs to be stricter punishments for such dogs & faster prosecution of such cases. People need to rediscover their sense & realize that the rapist is the one with the shameful act, not the victim. The victim should be helped in all manners & not discriminated against, much less be killed for the sake of the family’s honour!

Let’s be human for a change.

….could cost a child his life….

I’ll be short & precise. Our education system sucks & so do some of the so-called teachers. From ego-centric to money-minded, we have all kinds trying to ‘teach’ students & ‘shape the future generation’. God save India!

When my sister called home with the news that one her college-mates is missing, we were aghast. And angry when we heard the reason why. It seems that the guy had got an ‘F’ in one of his practical subjects & because of this his CGPA got screwed up. Like most of the students he had obtained a loan from the bank to pay for his education. But a poor CGPA means no further loans( am not sure about the benchmark in this). In spite of pleading repeatedly with the faculty & the particular teacher, he didn’t get the pass grade ‘P’. Quite obviously distressed he left the hostel & is still missing!

Take another case. A premier college of our city is bent upon banning & rusticating students on alleged ragging cases. And not just once…These students are sometimes even thrown out in the middle of the night from the hostel, with nowhere to go to! This is done without proper verification of the case.

I agree grades are important & just giving away a P, would be very unfair to others. But when the case is such that a student may have to end his career, is it bad to show a bit of leniency? Was it right on the part of the teacher to abuse the student & claim he doesn’t give two hoots about whether he stays in the college or not?! If a child gets an F isn’t that partly the teacher’s fault too? We all doze in the class & very few bother to take notes. Not every teacher is as interesting or good as your favourite one, right? So why just blame the student when they fail?

Ragging is a punishable offence, I agree. But what happens when juniors decide to use it to harass the seniors? Institutions don’t give a second thought & jump to the conclusion that the junior is the victim. Shouldn’t both the parties be given a fair chance? Why involve money in this case? When an accused doesn’t pay, throw him off the campus?

And dare you raise your voice, or your dreams of campus placement will get over before you know!

This post is a part of the weekend blogging contest at BlogAdda.com in association with 18again.com

I looked at him frustrated & said it again –“no, am not exactly in a mood to go & visit the temple…it’s getting dark & I’ve to get back home..” “Are you sure there is no other reason why you’re not coming? Some special time of the month…” lopsided grin & raised eyebrows followed. “Nope, am not on my periods yet. Its just that I don’t want to go now okay?” The look of stunned bewilderment & embarrassment on his face was not the only reason why I had said it-“periods” aloud. It always puzzled me as to why do we never say it when we are having our menstrual cycles, instead of making up stomach aches & what-nots? Why do we hesitate to visit a gynaecologist when we have irregular periods or issues with white discharge? Let alone a doctor, we even refuse to discuss this with our Moms or friends!

Talking about women’s intimate health issue, it is one of those taboos in our so-called culture, much like the issue of sex. Everyone does it, faces it but refuses to openly discuss it. Now while, sex education is something that should be done after a proper age, I believe talking about intimate health issues should be started as early as possible. I remember how I was scared when I first had my cycle. Thankfully it wasn’t in school. I never wanted my little sister to face that trauma, so when she was of age, I talked to her, telling her how to handle the situation. And it really helped. She wasn’t scared at least not as much as I was! Parents often make the mistake of deciding that their little girl is too young to know about all this. They don’t realize that the sooner they know, the better prepared they will be.

We’ll come to kids later, lets talk about the ‘adults’. How many times when you have such a problem, you go up to your Mom & talk about it, forget about approaching any male family member. And how many times have you been turned down & told it’s a trivial issue that will somehow get resolved by itself? Many even refuse to go for a check-up if there’s a male doctor there! Does our tradition ask of us to ignore our health for the sake of protecting the woman’s ‘honour’?

Hushed whispers are not the solution. You need to speak up & get help if you are facing problems. Women tend to ignore their sexual health issues & their reproductive system mostly because they don’t know who to approach for help. While the urban woman may somehow manage, it’s the women in orthodox villages that face the brunt of this societal restriction. Proper hygiene, medication & education are the key points here. Every woman should be comfortable with knowing their body & not be ashamed of discussing the problems they sometimes face. It’s time to stop with all the whispers & openly talk about it…to your husbands & your kids too. Let your girls know you’re there to help & let your sons know that women’s intimate health issues are not something they can joke about. Building respect will increase communication & make sure no woman feels ashamed again.